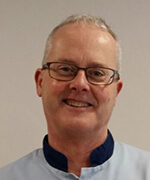 Dr. Alan Thomas graduated from Trinity College in 1986. He successfully completed diploma in Clinincal dent. In 2002, he also did post graduate courses in Endodontics, Orthodontics and Aesthetic Dentisty. He has been working in Sydney in Australia from 1986-88. While on return to Ireland he worked (1988-89) in Enniskillen Co. Fermagh. He has been working in this practice since it was established in1989 first as associate and then principal of the practice. He has been a family dentist to the patients of this practice since many years. He is very keen in providing general dental treatment and cosmetic dentistry. Dr. Alan’s easy going nature puts patients at ease and his popularity has led to a constant return of our patients from beginning. Dr. Thomas and his wife Pauline, have travelled to Africa providing volunteer work. As a hobby he loves sports in general but rowing in particulars. And has been coaching of Rowing for 20 years helping athelets to win national and international titles.